Our SQL Server on Linux system is a CentOS 7.5 VM, running SQL Server 2019 (CTP2). There is 12GB of physical memory and 80% of that is dedicated to SQL Server via mssql-conf about 9.2GB, the default configuration. I’ve also set Max Server memory to 8GB for the SQL Server instance.

So let’s start up SQL Server on Linux 2019 CTP2 and query the SQL Server’s cache sizes when there’s no data loaded. I’m going to look in  sys.dm_os_memory_clerks for memory allocation accounting information. In Figures 1 we can get a feel for the memory distribution across the system’s caches. Special shoutout to the new “Azure Data Studio” I’m using in these demos. 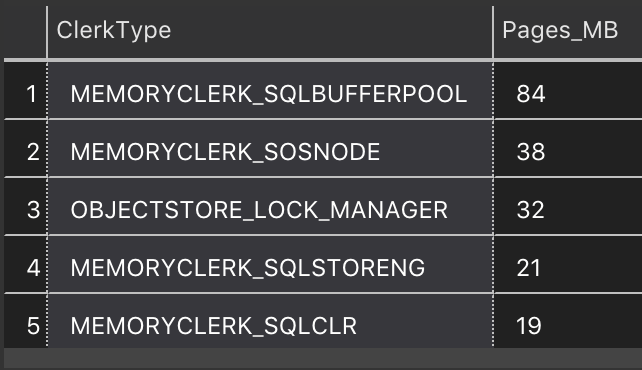 Getting Memory Information From Linux

We can use the command pidof sqlservr to find the process ID for our SQL on Linux process, in our case it’s 14689. When running SQL Server on Linux there is always two processes for sqlservr, we’re going to look the one with the higher process ID as the one with the lower PID is the watchdog process.

Below is the output from our process’ status file, filtering for the values we’re interested in. You can see about 16.4GB of Virtual Memory (VmSize), 7.9GB of which is in actual RAM (VmRSS) and 0MB in the swap file (VmSwap). Wait a second, 16GB of for VmSize? Yea, 16GB for VmSize. That’s the reserved allocation for the whole process. More on that in a second…

Now, if we look back at the previous post here on SQL Server 2017 RTM, the memory distribution was a bit different. We see about 10.16GB of memory in VmSize

Now, I very rarely post something when I don’t have an answer for a specific behavior but this case I don’t. My thoughts on this are, that 16GB is the reserved allocation for the whole process. Linux uses a demand paging allocation system so the majority of the process access space is just a reservation and isn’t backed by actual pages. So it’s not *really* consuming physical memory. But what I do find interesting is the process seems to carry that allocation forward, as I loaded memory in, the VmSize went from 8GB (which is the VmSize when SQL Server Starts) to 16GB (when I loaded the 8GB table). I’ve reported this to the product team and I am awaiting for an answer on the ~8GB discrepancy between the two tests.

Using a small C program I wrote, I use calloc to allocate large sections of contiguous memory and then I have the program continually write data into the memory buffer to ensure those pages stay in physical memory. Using this program, let’s allocate 7GB of RAM. I’m choosing this value because its going to cause my system to exceed it’s physical memory but NOT exceed the amount virtual memory in my system when including the swap file’s size which is 5.8GB on my system. Things can get really dicey if you exceed physical and virtual memory size, processes will start to get killed. Microsoft documents a case here. Just so you know how important adding a monitor for external memory pressure is, when I allocated 7.5GB and exceeded physical + virtual memory Linux killed both the memory allocation program and SQL Server to protect the stability of the system, oomkiller is a thing to look out for!

Now, let’s look at the memory accounting information at /proc/PID/status for my memory allocator program. In the output below you can see we have just about 7GB of virtual memory (VmSize) allocated and nearly the same amount of memory that’s resident in physical memory (VmRSS) and no data in the swap file.

Now in SQL Server 2017 with that 7GB program running would cause Linux to need to make room in physical memory for this process. Linux does this by swapping least recently used pages from memory out to disk. So under external memory pressure, let’s look at the SQL Server process’ memory allocations according to Linux. In the output below we see we still have a VmSize of around 10GB, but our VmRSS value has decreased dramatically. In fact, our VmRSS is now only 2.95GB. VmSwap has increased to 5.44GB. Wow, that’s a huge portion of the SQL Server process swapped to disk.

In SQL Server 2019, there’s a different outcome! In the data below we see our 16GB VmSize which won’t change much because of the virtual address space for the process. With that large external process running SQL Server reduced VmRSS from 7.9GB (from Table 1) to 2.8GB only placing about 4.68GB in the swap file. That doesn’t sound much better, does it? I thought SQL Server was going to react to the external memory pressure…let’s keep digging and ask SQL Server what it thinks about this.

What’s SQL Server Think About This?

In SQL Server on Linux 2017, we saw a large chunk of the process address space swap out and we saw those pages stay resident in SQL Server’s buffer pool or really any part of the SQL Server process address space since the Linux kernel is an equal opportunity swapper…so anything in the caches managed by SQL Server didn’t know if that memory was resident in physical memory or was actually on disk. In figure 3, we see the top memory consumers after external memory pressure, our buffer pool is still fully populated with our table data.

Ok, let’s look at what happens in SQL Server 2019 with external memory pressure. Looking at the memory distribution, we see that the memory clerk for SQL Server’s buffer pool reduced its memory footprint from 7,227MB (the value from way back in Figure 2) when the buffer pool was first loaded with our large table. Wh then applied external memory pressure with our 7GB process and now we see the buffer pool is reduced to 3,502MB a reduction of 3,725MB. Cool, looks like we dumped our buffer pool to protect the system but not the whole buffer pool, there’s still 3,502MB in memory. But the SQL Server 2019 on Linux process still swapped out about that much data (Table 5)…what’s going on? I still don’t know. Let’s keep digging.

Figure 5 – Resource Monitor output before and after external memory pressure
From the output of this query, we can see that System Indicator is 2 during periods of external memory pressure. This is a signal from Resource Monitor to SQL Server to dump its caches to protect the health of the overall system.  We certainly observed that in the output in Figure 4. But what we also found is that Linux is placing 4.68GB of memory into the swap file and that SQL Server is holding on to 3,502MB of memory in the buffer pool while the VmRSS of the process is 2.8GB (Table 5). So the question remains, why is SQL Server swapping so much of its memory out to disk and holding on to so much memory in the buffer pool even though it’s seeing the low memory signal from Resource Monitor. This data is further backed up by the fact that we see SQL_CommitedMemory_KB staying relatively stable in the light of the external memory pressure, the expectation is that would reduce. So it’s like it’s not quite finishing the job deallocating the memory. So let’s ask Linux what it thinks about this.

Resource Monitor on Linux – How I think it works…

If you’ve read this blog before you know I like to use strace to find out how applications interact with the OS via system calls. Well, let’s use that technique to try to figure out what happens when SQL Server starts dumping it’s cache under external memory pressure.
In the last section, we learned that Resource Monitor can track high and low memory conditions in Linux. In this section, let’s see how it interacts with the Linux memory management system to deallocate memory.
In the output below (Table 6) you can see the aggregated system calls when I’m applying external memory pressure to SQL Server on Linux. From that output, it looks like SQL Server on Linux uses memory mapped files, which is a file access technique where files are opened mapped directly into a process’ memory address space. The process can then access the file via direct memory addressing rather than using system calls.  This type of access actually makes quite well to the internal file structures used in SQL Server data files.
During external memory pressure, the madvise is the most frequently called system call during this period. This system call is used by applications to advise (hint) the kernel on what to do with ranges of memory under certain conditions. In the last section, we observed that Resource Monitor can sense the external memory pressure and signals SQL Server to clear its caches and this is likely the implementation of how those caches are dumped.
Under memory pressure, the madvise system call is called with the MADV_DONTNEED flag for large address ranges in SQL Server’s process address space, the memory mapped file. The MADV_DONTNEED flag tells the kernel that the application does not expect to access these pages in the near future and they can be discarded and eventually freed rather than swapped out to disk. See the kernel source code here for how it works.

My theory is that this is how Resource Monitor is signaling to the OS that these pages are no longer needed and should be deallocated due to the semantics of the madvise system call the pages are marked as not needed. So we see the reduction in the size reported by SQL Server’s memory clerks. But what I find interesting is the amount of memory that’s still hitting swap when we look at the memory accounting information for the individual processes and the IO profile of the system during external memory pressure. So it seems like the kernel or the application is holding onto pages and they’re hitting swap rather than being deallocated.
This is just my theory and I’m trying to bring the pieces together in this emerging technology since it’s still in CTP. So if you have some insight as to what’s happening at this layer, I’d love to hear from you :)